A group of people who have experienced street homelessness have come together to produce a photography exhibition focused on urban waste and ‘a society that discards possessions and people’.

The Good Shepherd charity runs an art and photography class as part of a programme of meaningful activities designed to engage vulnerable members of the community and help them rediscover their confidence and self-esteem.

Thanks to a grant from the West Midlands Combined Authority, the group delivered the project photographing waste and redundant objects during which they received tuition ahead of producing a final video showcasing their results.

The project has also now been immortalised in a fantastic hardback book of photographs and quotes available to purchase with all funds raised being put towards continuing running costs of the class. 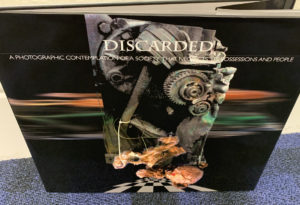 “This has been a really positive project for everyone involved, a photographic concentration on a society that discards both people and possessions,” says Chris Manley, who helps leads the sessions.

“We took the guys out to take photographs of different items which have been discarded in society, and just gave them some help with the presentation and editing in the studio.

“For those involved it was a really worthwhile experience and seeing their names up there on their photographs in the finished video gave them a real boost.”

Chris is joined in leading the art and photography class by volunteer Kate Penman, and Leanne Hayes, a former rough sleeper who is also studying for a degree in fine art at the University of Wolverhampton.

It is a class that has been going for several years, with their work also featuring in a Collectivism Recovery Exhibition at the Light House Cinema and Arts Centre back in 2019. Discarded is now going to form part of an exciting new exhibition entitled ‘Recovery is for Everyone’, running from September 17-29 at the Light House during Recovery Month.

“There is that saying that ‘you go where you are loved’, and I believe that the group knows that they are loved and valued at the Good Shepherd,” says Kate.

“This environment encourages people to let their barriers come down and as a result people are more likely to talk about other issues that may be concerning them.

“From the success of having their work shown at an exhibition and now the discarded film and its soundtrack it means so much to us all as a group.

“When we were given permission to use the soundtrack, and I played it to the group, it was a moment of pure validation – that their work was deserving of this beautiful classical music.

“It’s the complete opposite of feeling discarded. It’s really a project about being valued.

“Through our work together, we have a platform to tell stories and share talents that were previously unknown.” 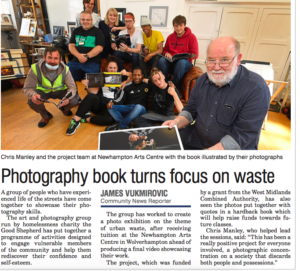 Prior to the pandemic the class was meeting at the Newhampton Arts Centre, where Chris is based, and it will return there in the near future to work on further projects.

“Some people might think it is a negative experience because of what those attending the class have been through in their lives but it is actually really uplifting,” added Chris.

“They all really look out for each other, and art and photography give them something constructive where they can really channel their feelings.

“I remember one guy who was struggling because he was so angry but we set him up with a palette and some paints and all of a sudden he became absorbed in what he was doing – it gave him an outlet which he knows he can revisit when he feels angry or anxious in the future.

“On another occasion we wanted to photograph the guys but wanted them to feel uninhibited so gave them the camera in a studio setting and let them photograph each other and they had a whale of a time.

“They came up with some incredible pictures, far better than I could have taken, because they know each other and have that emotion between them which leads to an empathy between the photographer and the subject.

“They have been through so many issues and don’t have much in their lives but the class provides such a really positive experience for everyone involved.”

Funding for the project came from the Rough Sleeper Initiative innovation fund from West Midlands Combined Authority, who highlighted the Good Shepherd as a case study in a recent report about homelessness.

‘The project had a variety of positive impacts for attendees – it was successful in showcasing skills, had therapeutic value and supported in engagement with other services,’ the report concluded.

Three of the service users involved in the art and photography class are part of the Housing First programme, a scheme run in partnership with Wolverhampton Homes where individuals with a history of rough sleeping are found accommodation and provided the wrap-around support to help them rebuild their lives.

“The value of the Housing First initiative is that it is not related solely to helping people into accommodation but providing so many additional strands of support and encouragement,” says Surinder Kapur, Team Leader for Housing First at the Good Shepherd.

“This includes helping individuals to engage across different activities to help them regain feelings of confidence and self-esteem, and it is fantastic to see the progress they have made thanks to attending the art and photography group.

“The video and the book which have been produced from this project are excellent and everyone involved should feel extremely proud of the results.”

*The Recovery is For You exhibition is a multi-disciplinary exhibition which is open from Tuesday to Sunday at the Light House, between 1pm and 8.30pm, from September 17-29. The exhibition will challenge addiction-related stigma and highlight the stories and experiences of those in recovery from various forms of addiction. Admission is free and everyone is welcome.

A police officer from Wolverhampton is taking on a running challenge in June to fundraise for the Good Shepherd during the charity’s 50th anniversary. Twenty-seven-year-old Jodie is...

Subscribe to our monthly newsletter and stay up to date with all news and events.